First, a concession: the Dogons are a very complicated group of people. They have unique social and political structures, their own religion and mythology, and even their own astronomy. It will be impossible to give a complete, or even fair, depiction of them in this blog entry. So instead of trying my best at an ethnological description that is bound to fall short, I’ll simply share with you, my experiences from trekking through the Dogon Country.

The Dogon Country is vast. The fact that circa 400,000 Dogons live here, in spread out villages, should give you an idea. The most famous part of the area is a 150 km long sandstone wall that carves its way through the landscape. There’s nothing less of a 300-500 metre high stone wall, with a rocky plateau on top and sandy plains below. Long before coming to Mali I had decided that I would walk, maybe not the full length of the cliff, but at least a lot of it.

This being Mali, I’d arranged for a guide to take me through the trek. Not only because of the risky security situation but because there are so many unfamiliarities, taboos and social norms in Dogon culture that I would be bound to offend, hurt and otherwise insult scores of locals by trekking there on my own. These otherwise isolated villages have seen a lot of tourism in the past, and I was determined to travel responsibly. Just to give you an idea, certain trees, ceremonies and small altars cannot be photographed, others can. Some overgrown tracks are not to be used, though they seemed like exciting paths to explore with my traveller's eyes. 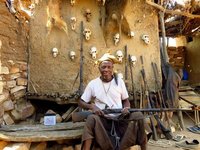 But before getting this far, readers of my last blog post might remember that a local police officer gave me a good scare on my way to Dogon Country be telling me that the area wasn’t safe. “Trekking around Dogon Country is perfectly safe” Mamadou, my guide, ensured me. To prove his point he told me that four Germans had just set off for three days in a 4x4. This calm me down. Others are actually willing to go here. Plus, four Germans in a big car would be a much greater price for any kidnappers than I would be. They would also be a lot easier to find. I did take one precaution, though. I told everybody that I was from England. It’s well-known down here which countries do not pay ransom and which do. Telling people I’m English would make me a less attractive target because the UK never pays ransom. Just to make it clear, though, none of the 90+ Westerners kidnapped in the Sahel since 2003 have been abducted from or near the Dogon Country, though I was told that the insurgents used to trade in certain Dogon towns a few years back. 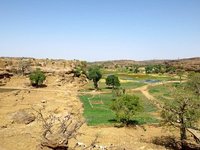 Sanga and Its Onion Fields

The walk itself started in Sanga, one of the larger towns on the plateau. It’s made up of fourteen smaller hamlets, all with their own families and onion fields (onion in the cash crop for the Dogons). Each hamlet, and each village I would visit later on, have certain important buildings. Most notable are the granaries with their pointy straw roof and cylinder shape. They primarily store millet, but also valuables like clothes, jewellery and money. Then there are the meeting places. Low, low, structure with roofs of eight layers of millet-straw – one layer for each of the founding ancestors accordingly to Dogon mythology. The low ceiling is an effective way of keeping tempered discussions calm. Should someone rise in anger he will instantly know his head on the low ceiling and turn quite very, very fast. 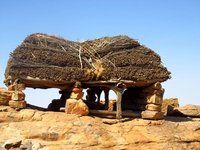 There’s also at least one animist temple, where animals are sacrificed. It’s a holy procedure, and while I was allowed to witness it through the open door, I was neither allowed to enter the temple nor to take photos. The latter due to a general prohibition of depicting holy sacrifices. There are also houses for women who are menstruating, as this is a time when they can’t live with their families, and certain houses for the village kings. These grand old men are elected by the village elders and are considered sort of divine. As a consequence are they not allow to leave the small compound their house is places in and no-one, not even their wife, are ever again allowed to touch them. Maybe we in the West should make the same rules for positions of power in our societies – that would probably limit the amounts of arses seeking political power...

During the five days of walking, we passed countless of village people in these villages. Tourism had become overwhelming back before northern Mali descended into conflict. To the frustration of many locals. Each village thus asks for a tourist tax for every traveller passing through, eating a meal there or spending the night. Mamadou took care of this. He also made sure to hand out plenty of kola nuts, which, traditionally, are gifts of respect. This was especially important in my meeting with the older generation, who had been most sceptical about the tourist visiting their villages.

However, as the old saying goes: You don’t know what you’ve got ‘till it’s gone. Everywhere I went, no matter their age, people thanked me for visiting. Some, almost, ecstatically, took my passing through as a sign that things were getting better. It was somewhat heartbreaking to ask them to keep their hopes down. Tourism had been a significant income for these otherwise poor farming communities. A lot of the money had been invested in small guesthouses, so as visitors stopped coming in 2012 many villages lost an important communal source of income that had greatly attributed to their development. One guesthouse manager I spoke to told me it had been a month and five days since he last had visitors – and they were only there for lunch before they drove off again. It was more than three months since anyone had last spent a night as I did. A sharp reminder that while war has not reached the Dogon Country it has ruined the local economy. 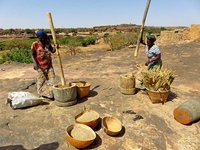 Talking about lunch, a quick word on the food. Visitors will see an endless amount of onion fields, but onions are mainly sold in markets (as far away as in Bamako and Côte d’Ivoire). Instead, the Dogons eat millet. A lot of millet. Having lived here for more than 600 years, they have pretty much found every possible way of forming millet into food. A few things stand out. Pô is a dough-like substance, much like dry and sticky mashed potatoes, but with less taste. It’s dipped in a cold sauce made from the leaves of Baobab trees. It’s not bad; it’s just pretty tasteless. Better is the flour and bread made from millet, though also pretty dry. 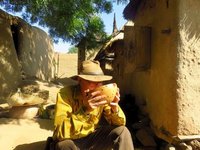 But no matter. My complaints about the food would disappear quickly as soon as I was told millet could also be used to produce beer. Millet beer is sweet and very potent. And should it be a week brew, it can always be spiced with coconut rum imported from neighbouring Burkina Faso – the result is the already sweet beer gets turned into a tropical drink that would knock out a horse.

All in all, the Dogon country is a fantastic place. Naturally, culturally and the people living there. The about 80 km we walked took me up and down the cliff a couple of time. In 40 degrees Centigrade. Lucky, it always seemed that a village inhabited by friendly Dogons was nearby, and people was more than willing to share their water and – more often – millet beer with me.

My last experience in Mali might well have been the greatest one. As of now, I have moved to the relative safety of Burkina Faso. So for this time around, I’ve once again survived one of my semi-suicidal destinations. Until next time Mali!