Dangerous Mali… Or is It...

Touring Mali as a tourist. But is it really as suicidal as many think it is?

I’m not trying to talk down the risks of visiting Mali. Then again, I kind of am. Sure, a few things are different from your usual vacation spot. During one weekend in Bamako, a security warning about a possible upcoming attack kept everybody indoors. A few weeks earlier there was an attack on an army barrack 60 km outside Bamako a few weeks, and I would lie if I didn’t feel a little uneasy when we went to a bar were a terrorist attack had killed five people back in March. Then again, the warned attack never came; the attack outside Bamako was directed, not at tourists, but at the military; and I’d happily use Bruxelles Airport again, so why not a Bamako bar? 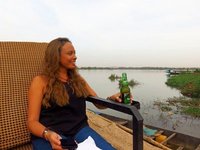 The fact is that I felt pretty safe – especially in Bamako. Even with the security warning. The place I stayed is the best place I’ve been for the past eight months, and I ended hanging out there for more than two weeks. About ten days longer than planned. The owners and staff took me in and made me part of their extended family of regulars and long-term occupants. That meant plenty of partying, karaoke and booze cruising on the Niger River. All perfectly doable in the shade of the more troubled stories typically associated with Mali. The country does deserve some positive PR at the moment. Before 2012 it was probably the most visited West African country. And rightfully so. Mali has a, for the region, unique mix of ethnicities, historical and natural attractions, and a lively and colourful economy making the country a gem – though it is little rough around the edges at the moment. 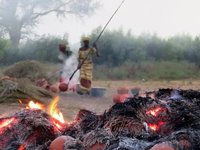 When I finally moved on from Bamako, Mali didn’t disappoint. A few hours northeast – still in what is considered the “safe south” – Ségou is the hometown of Mali's pottery production. An overnight river cruise took me and a Belgium/Senegalese couple through the surrounding villages to see the traditional burning of clay pottery before it’s sailed to the big market in Ségou . We spend the night on the Niger River, camping on a small sandy bank that had appeared as the high waters of the rainy season retracted. Again, perfectly safe.

From here I moved into more risky territory. Or rather, to where the US, UK and other governments advise against all travel. In the south, they just advise against “all but essential travel.” As I think I’ve already mentioned, governments tend to be very conservative in their security statements, mostly because they are the ones who will have to come and get you if something goes wrong. As a precaution, I arranged for a guide to pick me up as I arrived at my next destination, Djenné. 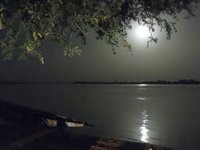 The reason to hire a local guide is simply. He knows the place and its people. If someone is trying to kidnap me, my best chance of hearing of it is by having local eyes and ears whose economy is based on tourists and their continuing visits. It also saved me a 5 km walk into town on my arrival. I’d gotten a late start to the day, so my shared taxi arrived at the final river crossing after the ferry had stopped sailing for the day. We could still cross the river by dugout canoe, but Djenné was still be a good hour’s walk further on. A phone call later Mohammad arrived on his scooter and ferried me to a hotel where he trusted the staff.

Helpful guides aside, the real reason to come to Djenné is the fact that the entire town, build on a small island, is made of mud. Wet dirt mixed with a few straws have created an ancient town, which still stands today because the local population viciously re-plaster their houses with fresh mud after each rainy season. Djenné’s centrepiece is its Grand Mosque. More than 18m high, it’s the largest mud/earth building in the world. Few terrorists would be able to talk me out of visiting this place.
Mohammad did mention that an attack on UN peacekeepers had taken place around 40 km outside Djenné a few weeks prior. But he also ensures me that everything was okay within the town. As with most of these attacks, it happened on the northwestern side of the Niger River. It’s a rather vital piece of information for my travels here, since the main highway – and all the sites I’m visiting – is to the south-east of the river, the more tightly controlled part of the country.

Moving further north, to the most important harbour on the Niger River, Mopti, Mohammad and I decided that it would be safer to take a small shared taxi, rather than a large bus. On the one hand, shared taxis are more intimate, and the fewer passengers mean that the already very small risk of someone calling the wrong guys to rat me out is even lower. On the other hand, it’s harder to keep a low profile in a shared taxi and passengers are hassled more at police checkpoints. A couple of times local law enforcement viewed my visit with great scepticism. At the very least I had to promise that I wouldn’t to go further north than Mopti to be let through the checkpoints. Not that I planned to anyway.

Arriving in Mopti I would soon understand why. The city not only has the most important port on the Niger, but it also has a large UN base. The first thing we came across – even before I had exited the taxi – was a large convoy of UN trucks and technicals (pickup trucks with big machine guns mounted on the back) full of ‘blue helmets’. Walking around Mopti the next day I came across a single UN jeep protected by no less than two technicals. A lot of firepower to protect a single civilian vehicle. The UN means business up here. 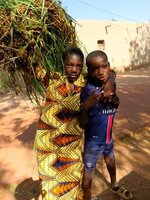 I had no guide on my walk around Mopti. So I had to explore the bustling harbour of Mopti on my on. The river is the most important way of transporting goods in Mali. With Mopti’s strategic location as a staging post between the north and the south, the town has grown rich. A few happy locals did come up to me ensuring me that “there are no ‘problems’ in Mopti.” ‘Problems’ being the favourite word to describe everything bad. It’s like “Voldemort.” If they actually say the words “war,” “attack,” “terrorism,” etc. it seems bound to happen. Unlike Bamako and Djenné though, I didn’t hear about any reason attacks here. Instead of a guide, I’d taken a hotel recommendation from Mohammad who knew the guys there and had called ahead to tell them to take care of me. This worked great, and I was treated like a king.

My last Mali-stop this time around will be a five-day trek through the so-called Dogon country. The areal is isolated by both savanna and mountains, and unlike any of the other places I’ve been isn’t it a well-protected urban centre. This does play a little with my nerves as the shared taxi left Mopti. It doesn’t help that the soldiers at the last checkpoint keep saying, “Pays Dogon, c’est par bon!” Basically, “Dogon Country, it’s no good.” My paranoia is beginning to creep up on me. The more optimistic voices in my head argue that it is simply a matter of the government not having a secure hold of the area because of it's isolation. The fact that the government doesn’t control it is not the same as the bad guys do. Isolation from one part can also mean isolation from the other.

Once again I have arranged to meet with my guide for the trek when I arrive. I'll have to discuss the situation with him and then figure out what to do...

Be safe; trust your instincts. One thing I learned years ago when robbed in the lawless "no-man's-land between Pakistan and Afghanistan: Avoid if possible, particularly if your life is at stake. I don't avoid risk; but I carefully consider them with health and safety in mind. I welcome the opinions of locals, who may know more than I do. Best wishes. Bob.