Travelling to a Warzone

Mali might not be your standard holiday destination, but damn it if I'm going to let the terrorist win!

A few months before this blog post, the Danish government passed a law making it illegal to enter a country were an [Islamic] insurgency is taking place. The legislation is aimed at radicalised youth travelling to Syria to join Islamic State, and the Danish Foreign Ministry will determine which countries should be added to that list on a case-to-case basis. Potentially, Mali, where I'm heading next, is on that list. We’ll see what happens. As of now, I don’t plan to join the al-Qaeda, but you just never know.

I’ve done a fair amount of visiting countries in internal turmoil, so I’m not too nervous. In 2007 I visited Sudan, in 2013 Afghanistan and a year later Iraq. Mali might just be the calmest country on that list. This has, not surprisingly, lead to both worry comments from friends and some sharp ridicule of my intelligence. To the extent that I have friends who refuse to follow my blogs because I post entries like this one. “Stupid, but Lucky” has long been my travel motto. So much that I’ve looked up the Latin translation, but “Steltus, sed Felix” doesn’t ring well as the English version.

It should be said, though, that I rarely go to active war zones. During the mentioned visits, I have never experienced a gun fight, a bombing or any other form of attack. These are large countries and staying away from the “hot” zones is usually possible. Being in the wrong place at the wrong time is something impossible is this world – even during the Boston Maraton or Bastille celebrations – though I do admit that my risks of ending there is bigger than those of your average New Englishman or Frenchman. The highest risk I’m taking of a different kind, but also one that I wouldn’t realise before it’s too late. Kidnapping for ransom or, less likely, beheading could be planned two blogs away while I feel perfectly safe in my hotel. There are some ways to counter this risk, which I’ve written about elsewhere. Somehow it seems travellers have to take a lot of heat from friends when making risky choices. More than people having other life-threatening hobbies. Sure, I don’t how much families complain before someone attend to climb Mount Everest – but at least a couple of individuals die every year attempting to reach the top. I tend to consider my travelling at par with mountaineering. Both in risk and reward. 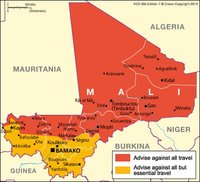 But back to Mali. First of all, the south is considered safe. Mainly the area around Bamako. Safe is, of course, relative, and there was an attack about 40 km outside the city a few weeks ago. Just like security warnings that confining everybody behind their hotels’ tall walls for days are common. The trouble really begins as one is moving north. The mythical Sahara towns of Timbuktu and Gao (both World Heritage Sites) is most definitely off limit. Mostly, because the area around the towns is largely controlled by the insurgents. I could probably catch a UN flight from Bamako to Timbuktu and avoid the roads and checkpoints, but the price tag (200US$) almost scares me more than the kidnappers. A risk that would probably be worse in Timbuktu than in Northern Afghanistan because the town is so small. I wouldn’t be able to hide. Then there’s the border area between then north and the south. Also, mythical Djenné, the Dogon Country (both Heritage Sites) and the important port of Mopti are bordering the troubled spots. The UK Foreign Service advice to “avoid all travel” in the region – contrary to the south which is only categorised as “avoid all essential travel.” Raids, attacks and insurgency activities are more widespread here than in the south, but far from the situation in the north.

In Bamako, people recognise this. Civilian staffers at NGO’s and the embassies tend to think I’m crazy, while military personnel tend to compliment the size of my balls for planning going up there. There’s also a distinct difference in their advice. Civilian staffers think that going up there should be avoided, while military personnel believe that it’s doable if I’m careful. I guess this divide comes down to the level of risk the two groups are used to take. Going up there do require me to take more care than usually. I need to attach myself to local people that can be trusted and who know and follow the local situations. This includes spending time in Bamako making friends, maybe even hiring guides and if necessary pay someone to drive me between the towns if it’s deemed too dangerous to use local transport. Either because the roads pass through unfriendly territory or because the level of insurgency is unusually high and it would be easy for opportunists on the buses of bus stations to sell me out to potential kidnappers.

Whatever the risks, I’ve done this before and is getting better at judging whether something is doable or not. So far have I come out alive every time, and I don’t tend to take any risks that could diminish the chances of this happening again. Other than actually entering Mali that is. And I’ll be sure to let you know if I get arrested on my return to Denmark too.